The Reviews Are In: Project STAGE Was a Smash Hit

Hoyt Sherman Place is one of Des Moines’ most historic venues (it’s listed in the National Register of Historic Places), going back almost a century. Before she mysteriously vanished attempting to fly around the world, aviatrix Amelia Earhart spoke there. So did famed Iowa artist Grant Wood. Past performers there include everyone from marching maestro John Philip Sousa to, well, suffice it to say the elegantly restored theater was recently inducted into the Iowa Rock ‘n Roll Hall of Fame.

But this past weekend Hoyt Sherman Place played host to something new, an event with a futuristic bent to it.

In between and following performances, kids frolicked and picnicked on the front lawn, enjoying the beautiful spring weather.

Saturday’s agenda included a reception for the student photographers whose work was on display in one of the galleries at what was also the city’s first public art museum when it opened. The students displayed images that resulted from a series of photography workshops they began attending in January.

Once the formal program ended an impromptu dance party began – with the soundtrack provided by DJ IZ – as students and a few adults gathered on stage to celebrate the end of the two-day event.

Ben Heinen is the DMPS Turnaround Arts Local Program Coordinator and one of the primary coordinators of the festival.

“We let our students speak for themselves,” he said in the wake of the weekend. And they made quite a statement. Will this inaugural event become an annual one? “We certainly hope there will be an encore,” was Heinen’s response.

Special thanks are due to the Iowa Arts Council, Prairie Meadows, and the Hoyt Sherman Place Foundation for providing the funding for the first year.

But especially major props must go to Hoyt Sherman Place for opening up their landmark theatrical, artistic china shop to a thundering herd of young bulls.

Like the Cattell kids belted out on stage Friday afternoon during Aladdin, the grandeur of the local landmark represented a “Whole new world…with new horizons to pursue…”

Photos of the Project STAGE Festival 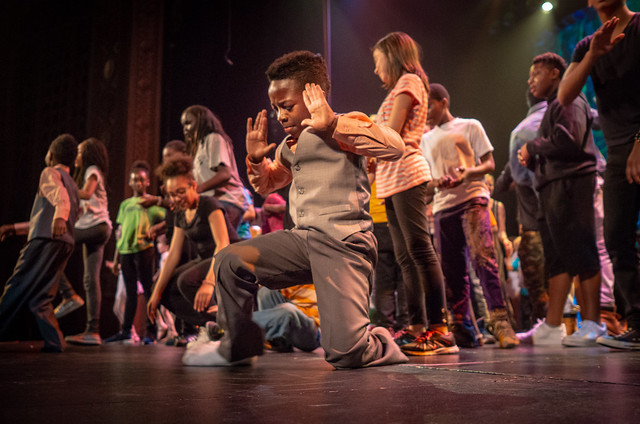