Amy Abler stood at the front of a different model school bus first thing Monday morning, like a DMPS mission controller during a countdown. A project she’s been working on for quite a while was about to launch. Moments later, it finally did and a busful of juniors from North headed east.

Abler is the Secondary Counseling Specialist for DMPS and yesterday’s pack of Polar Bears was the first of three loads of “first gens” she’s sending to Iowa City this week for official college visits at the University of Iowa. Tuesday it’s Roosevelt’s turn and Thursday will be East’s.

First gens are students who are the first in their families to attend college, and Abler has been working with the U of I to collaborate on what has the makings of a win-win recruitment campaign.

“The university got a grant that’s paying for the bus charters,” Abler said, “so on top of everything else, this program is cost free to the district.”

By “everything else,” she means the purposeful effort to provide equity of opportunity and access to deserving student subgroups who are underrepresented at the state’s regent schools, in part because they lack awareness of ways and means available to them. This week’s roundtrips to the future and back are like going an extra hundred and ten miles or so to create that awareness. The mission Abler’s at work on? Preparing students “to be successful at the next stage of their lives.”

Yesterday’s maiden voyage of the first gens went off without a hitch.

The North bus arrived at Planet Hawkeye right on schedule at 9:30 and proceeded to tour the west campus where Kinnick Stadium, Carver Hawkeye Arena, Hancher Auditorium and the sprawling University Hospitals complex are located.

While the visitors gazed out bus windows at museums, stadiums and research laboratories on grander scales than they’re used to, a current Iowa student (a 4th generation Hawkeye) narrated the tour. She pointed out the building where the ACT exam that all DMPS juniors recently took was “invented” and sprinkled perks on top like all-you-want soft-serve ice cream at the dormitory dining halls and free smoothies at the student rec center, whether you work out or not.

Later, a walking tour of the east campus included a pitch from an admissions rep in the student union, a peek inside a freshman’s dorm room and a stop at Old Capitol, the original statehouse when Iowa attained statehood in the mid-19th century.

By the time the group paused for lunch in a private wing of a dorm dining hall, eyes and horizons were widening.

While they ate, the students also heard from a financial aid officer, about how to afford college, and an academic coach from the university’s Center for Diversity & Enrichment, about how to succeed.

“I told Chris (U of I Associate Director/Outreach & Recruitment, Traetow) that we’re not just interested in getting kids TO Iowa,” Abler said, “we want them to stay and finish once they arrive. Retainment is key and that requires support.”

When the question was posed at lunchtime, “So who wants to be a Hawkeye?” lots of hands sprang up.

Three of them belonged to Kendra Hernandez Balboa, Katherine Melara and Asal Eid, a trio of friends who all have ambitions in health science fields.

“I was pretty sure already that I was interested in Iowa,” said Kendra, “but this makes it all feel real and official.”

“I want to become an OB-GYN,” she said between bites of the soft-serve that she declared as good as promised earlier on the bus tour. “I like the idea of helping to bring new life into the world.”

She also likes the idea of starting new traditions and blazing new trails in her family as the eldest of four children.

It matters to her local school district too, and her state university. Consequently, her future is, like a song that’s older than Kendra and the rest of her class says, “so bright” she’s “gotta wear (Hawkeye) shades.” 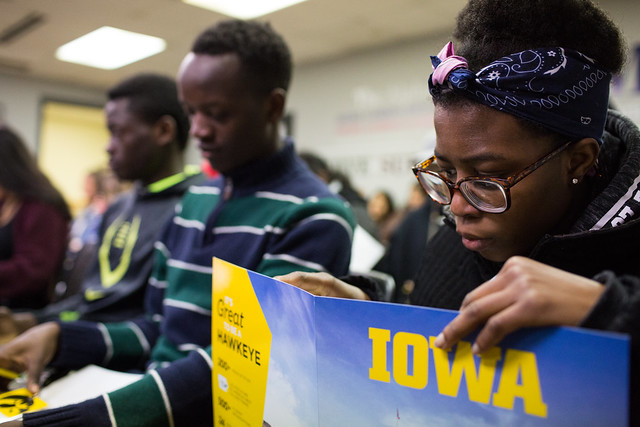