State of the Arts Celebrations for DMPS Students

Thursday was especially artsy around the district, something of a one-day Renaissance.

Before coming together for the evening concert in the Jacobson Exhibition Center, three ensembles (band, orchestra and choir) totaling more than 400 performers found separate spaces to rehearse at the Fairgrounds.

The band brushed up on the National Anthem under the direction of Steve Kellar from Summit Middle School in Johnston who thought the first run-through was a bit sluggish.

“We sound like we’re stuck in molasses,” he said. “It needs a little bounce. It’s not a dirge, it’s a celebration. Let’s try it again.”

Much better – bouncy. Just wait until the combined voices of the choir joined in!

Meanwhile, downtown at the Capital Square atrium it was plain to see that this is another banner year for visual arts in the district. Highlights have already included an exhibition at the renowned Des Moines Art Center that featured a collaboration between Findley Elementary students and Brooklyn artist Dave Eppley and the usual steady stream of fieldtrips to the Art Center by classes across the district. But the culmination is always the springtime Art Exhibit which features banners from every DMPS school hanging from the balcony railing and works by students in every grade level, K-12.

“I just love getting out of my own classroom and seeing the great work that’s happening all over town,” said Findley art teacher Lisa Hesse as the reception was about to launch Thursday. “It’s so encouraging, the way our students express themselves.”

Needless to say, there’s a lot to see, but plenty of opportunity. The exhibit will be on display through March 28. It’s free, though parking might cost you a pittance.

One general observation/suggestion: There are plenty of self-portraits to be found as you weave through the gallery, each one as unique as its creator. But closer looks will reveal one trait in particular that’s common to them all – self-confidence. Teachers in any discipline will tell you it’s a beautiful thing to see in a student.

Between the two events, nearly a thousand students were involved – the tip of an art-berg.

Photos of the All-City Music Festival 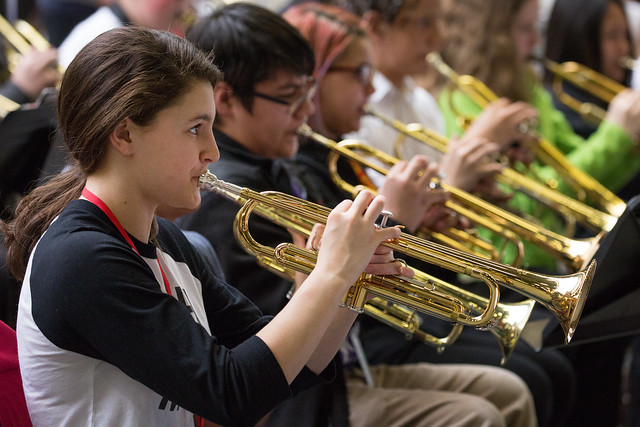 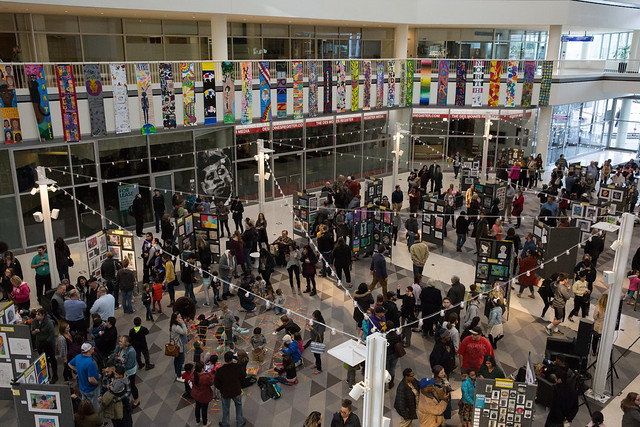