Next Generation of Educators “Dream to Teach”

Thursday was a fully scheduled daydream for some 170 middle and high school students involved in the district’s Dream to Teach program.

Launched in 2014, Dream to Teach is an extracurricular activity that aims to establish a supply line of minorities into a profession where they are underrepresented. That’s especially troublesome in a district where students of color are a majority of enrollment.

Students in grades 6-12 are assigned teacher mentors who encourage them in their quest to teach. D2T also forges partnerships with community and higher education institutions to provide scholarships and other supports.

The program currently has chapters in seven of the 10 district middle schools and all five comprehensive high schools. And, announced Central Campus Director Aiddy Phomvisay Thursday morning, the interest in D2T has led to an expansion of the Urban Teacher Academy curriculum that’s currently open to high school juniors and seniors at CC.

“Starting next year, we will offer introductory teaching courses (Equity in Education and Career Opportunities in Education) for 9th graders,” he said. “Already more than 50 students have enrolled, but we still have room for more. This is an important bridge we have needed.”

That expansion has the potential to trickle upward into the teacher academy where the current enrollment is 31.

Then it was time for the keynote speaker, Kenneth Gaskin, who is in his second year of teaching 5th grade at Cattell Elementary.

Gaskin is a rarity: an African-American male, elementary schoolteacher. His presentation was titled Be You, Stay True, Make Moves, and it outlined his own winding journey into the field that sorely needs him and others like him.

“When Carrie (Romo) first invited me to speak, I wasn’t sure that I have enough experience,” Gaskin began. “But then I realized how important representation is. I only had one teacher of color growing up (in Pennsylvania and Iowa).”

Gaskin said he hopes it means as much to his students to see him at the front of the classroom as it does to him to teach them.

“When I got the call offering me a fulltime job at DMPS (after a year of subbing), I did a little dance,” Gaskin confided. Which seemed kind of hard to picture for a self-described introvert who’s generally a man of few words. But after he explained his personal philosophy/hashtag (“making moves”), it fit.

His audience of educator wannabes spent the rest of the day dreaming up some moves of their own in an array of breakout sessions.

Photos of Dream to Teach Event at Central Campus 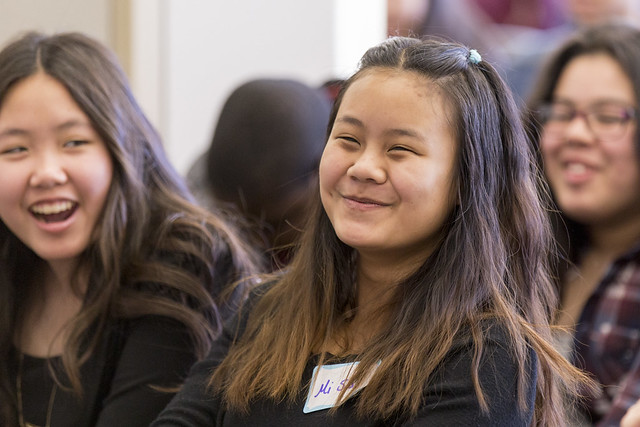