Friday was the last in a series of professional development days sprinkled throughout the 2017-18 school calendar. Students got the day off from classes while their teachers learned to teach more effectively.

PD, as it’s referred to in the trade, takes different forms at different schools, depending on lots of factors and variables. On Friday at Meredith Middle and Hoover High, the conjoined IB schools on the northwest side, it took the form of a hard look in the mirror.

The twin packs of Huskies collaborated to deliver a full day of “Hoover/Meredith EQUITY PD,” it said on the cover of a program that detailed the lineup of keynote speakers and presenters at workshops and breakout sessions.

Here’s the district’s official take on equity, as declared on the DMPS website:

The Des Moines Independent Community School District does not discriminate on the basis of race, color, national origin, gender, disability, religion, creed, age (for employment), marital status (for programs), sexual orientation, gender identity and socioeconomic status (for programs) in its educational programs and its employment practices.

Following the morning keynote delivered by Jennifer Harvey, an insert seemed in order between the words not and discriminate: intentionally.

Dr. Harvey is a Professor of Religion and Faculty Director of the Crew Scholars Program at Drake University. Her most recent book is Raising White Kids: Bringing Up Children in a Racially Unjust America. She is also the author of Dear White Christians: For Those Still Longing for Racial Reconciliation and Whiteness & Morality: Pursuing Racial Justice through Reparations and Sovereignty.

Harvey is white and she worked hard to earn the right and expertise to talk about the concept of what she calls “white fragility.” She is only 46 years old, but has done the research to speak with authority about racial dynamics and dysfunction in America that go back to the early 17th century. She retraced a timeline beginning with English explorers who came to what became Jamestown, Virginia looking for gold and settled for tobacco, a change of plans that evolved around an enslaved labor force.

“There’s a resiliency that’s required to deal with historical experiences like those of African-Americans,” and whites don’t have it – yet, according to Harvey. “Not because we’re bad people,” Harvey said, “but because we haven’t come to grips with how we got where we are today in terms of race as a social construct in America.”

“We can’t be colorblind AND celebrate diversity,” was another of Harvey’s points. If a school district as diverse as DMPS is to fully overcome the challenges that come with that characteristic it must seek a means of properly celebrating whiteness too, one that doesn’t echo the false narrative of racial supremacy.

When she stopped and invited questions, Harvey got some good ones.

A white teacher acknowledged the overt means of oppression in the past going all the way back to Jamestown. “But here at Meredith and Hoover,” she said, “we are trying to do the right thing. We have PDs about equity and cultural proficiency all the time. What else are we supposed to do?” Hopefully, the rest of the day provided her with some new answers.

A black teacher wondered aloud why both of the day’s keynote speakers are white. Fair enough, Harvey responded, while also noting that “probably 95%” of what she knows about racial justice was taught to her by black women. “’We need people like you to talk to people like you,’ they told me. Because they’re tired,” she said.

Later in the day, Frank Meeink gave the lunch hour talk. At a young age, Meeink was a skinhead and Neo-Nazi, a voice of hate roaming the heartland. A stint in prison got him to see the people who thought he should hate differently. Upon his release he went on to become a noted speaker and author, working with people to support tolerance, diversity and mutual understanding in racial, political and all aspects of society

Before a pendulum that’s been swinging in one direction for four centuries can start swinging back the other way, towards equity, it first must come to a stop. Maybe that’s what Friday morning in the Hoover auditorium was, a pause before a change of direction. 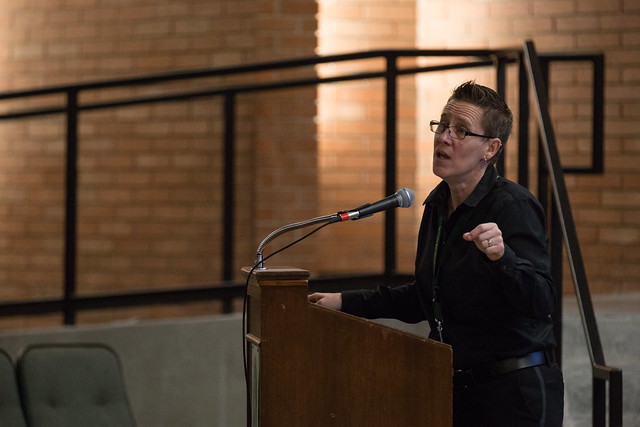