Hubbell Elementary School began February by ringing in Black History Month with an assembly in the gym that included the sounds of Roosevelt High School’s Bridges 2 Harmony gospel choir.

Wednesday morning the Hawks punctuated their celebration with a parade around their neighborhood. Too bad the month didn’t end with Tuesday’s parade weather, but no matter. The kids supplied their own sort of sunshine for the event, officially labeled a Dream Walk. Banners beamed with messages ranging from sweet ones like Kindness Rocks to the more pragmatic We Dream of Owning Our Own Restaurant.

As they rounded the corner of Polk Boulevard and passed by their big brother/sister school, Roosevelt, students came outside to shout support and applaud for the elementary activists who gladly exchanged high fives with their teenaged counterparts.

The special events that marked the beginning and end of February at Hubbell bookended a monthful of other black history emphases.

Many of the school’s activities and displays were organized by Sherrie Sauls, the office manager at Hubbell.

Besides the temporary decorations that lined the corridors all month, Hubbell’s halls are decked with plaques and photos honoring longtime teachers and members of the school’s hall of fame. One of those portraits is of Gloria Bumpus, an African-American woman who worked in the school’s Metro Kids program and was feted by the school on her 90th birthday.

The poster that asserted Kindness Rocks could just as well have been a picture of Gloria. 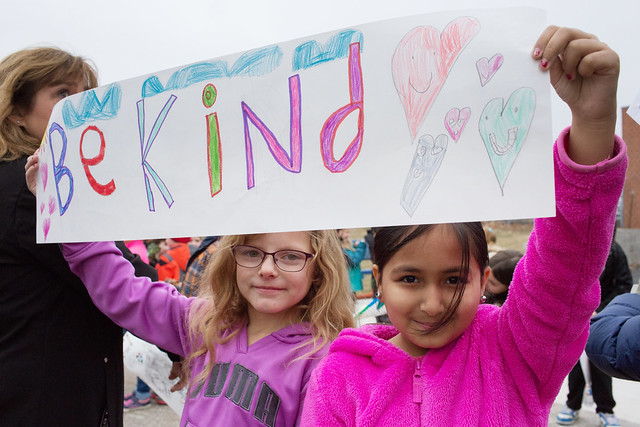