NOTE: Cloris Leachman passed away on Wednesday, January 27, 2020 at her home in Encinitas, CA.

Oscar- and Emmy-winning actress Cloris Leachman is a Roosevelt grad, Class of 1942. A pair of plaques mounted in the stage left and stage right hallways that flank the school auditorium identify the historic floorboards as the Cloris Leachman Stage. During her schooldays she lived a trophy’s throw from campus on a street prophetically named California Drive.

She has gone a long way since cutting her dramatic teeth here but has never forgotten where she came from or the way back. This past weekend clearly demonstrates her homing instincts.

Ninety years young, Leachman came back to a busy itinerary that featured events at the Des Moines Playhouse and the Des Moines Social Club (the second annual Cloris Awards for local theater standouts). But she also made time for two events at her DMPS alma mater.

On Sunday Leachman and an old school chum of hers, Eddie Rissien, co-headlined Roosevelt’s second Teddy Talks program, a community event. Rissien has compiled an impressive resume of theatrical credits in his own right, though his were earned in backstage roles as a producer.

The pair of old pals returned to school again on Monday afternoon for an informal Q&A with drama students.

At one point Leachman rose slowly from her chair on the stage that bears her name in response to a question about Grandma Moses, one of the many roles she’s played in her illustrious career. She was in her 60s at the time. “I aged from 45 to 100 in the 15 minutes of intermission between the first and second acts,” she said. Her gaze shifted to somewhere above the small audience ringing her on the floor. She extended her arm as though she was groping into the past, channeling the character. A monologue seemed forthcoming. But the moment passed. She smiled and sat back down with a self-deprecating wisecrack.

“Open as many doors as you can,” said Rissien. “And always count the house.”

“Be ready! And just have fun,” were Leachman’s essential tips, two personal policies that have served her well all of her life.

Rissien remembered his days as chairman of the Friday school assemblies when he got to make announcements to the student body as the first notion he had that there is something special about showbiz. Leachman’s reminiscences included hailing cabs on Madison Avenue in New York City when she was young and “lived at 40 E. 68th Street and always ran late,” and, even earlier, a radio program she did from the old KRNT Theater downtown before she left town for school at Northwestern University near Chicago.

It was sometimes hard for the VIPs to hear the questions but there was no shortage of them. And afterwards, posing for pictures and signing autographs, it was clear that while she may have lost a step since competing on Dancing With the Stars at the age of 82, Leachman’s flair for performance remains intact.

“I cannot believe I’m this old,” she said in a good news/bad news tone.

Someone asked her why she pursued a career as an actress. “It was just something to do for fun,” she answered. “It still is.” Clearly. She’s still at it. Watch for her in The Comedian, upcoming with Robert DeNiro. Or, for a peek at her early film work, go see Kiss Me Deadly, a 1950s noir classic that’s scheduled for a special screening Thursday night at the Fleur Cinema.

Better yet, support the drama program at her proving ground, Roosevelt High School, where new Theater Arts Director Mark Rixner is launching a fundraising drive to surround the Cloris Leachman Stage with all new seating. It would be good to draw a crowd for that production. 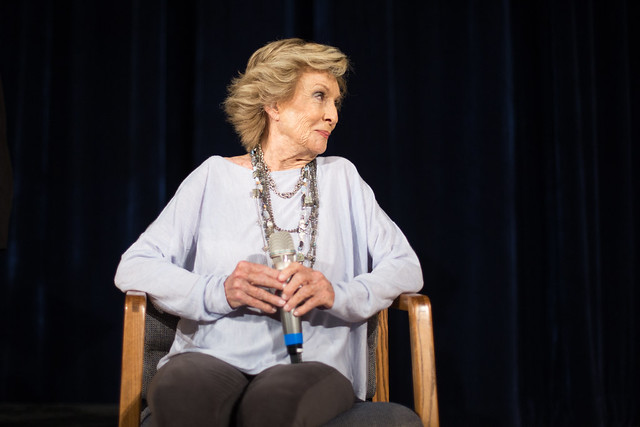